Apple and Samsung are allegedly replicating a new fast-charging smartphone tech. This new feature is specifically developed by one of their competitors, Oppo.

(Photo : Photo credit should read BRENDAN SMIALOWSKI/AFP via Getty Images)
An iPhone 6S is plugged into a battery charger on March 18, 2019 in Washington,DC. (Photo by Brendan Smialowski / AFP)

Oppo is one of the manufacturers that designs and produces advanced smartphone models, offering new features, such as the new fast-charging technology.

The Chinese tech firm showcased its innovation during Barcelona’s recent Mobile World Congress (MWC) event. But, is it really efficient that Apple and Samsung need to replicate the new tech?

According to The New York Post’s latest report, Oppo’s new charging tech can power up a smartphone to 100% in just nine minutes. 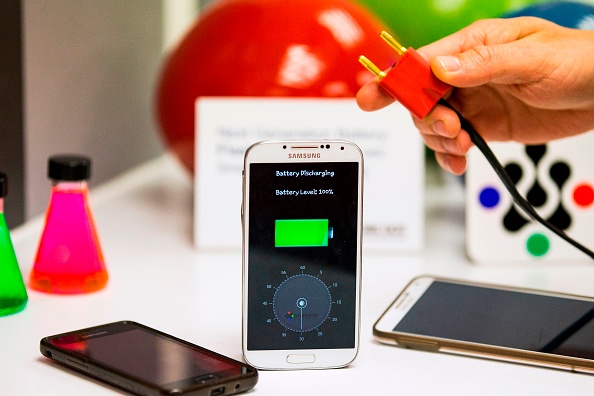 (Photo : Photo by JACK GUEZ/AFP via Getty Images)
A member of the Israeli startup StoreDot demonstrates a bio-organic charger system which they are developing that can recharge a smartphone battery in just 30 seconds at their laboratory in the Tel Aviv on April 9, 2014. StoreDot’s prototype battery and charger is currently being tested with Samsung’s Galaxy phones.

Right now, iPhone and Galaxy smartphones still don’t have this kind of charging feature. The models developed by Apple and Samsung still need more than one hour to have 100% battery power.

This is why some critics believe that the two giant tech firms will most likely copy the feature developed by Oppo. However, they didn’t say that Samsung and Apple will actually create the same version of the fast-charging tech.

However, this once needs around 15 minutes to charge a smartphone completely. After that, Oppo announced a new version called “240W SUPERVOOC flash charge.”

This time, the second version can provide 100% battery power in just nine minutes. As of the moment, this innovation is considered the fastest charging feature for smartphones.

On the other hand, Oppo also explained that its fast-charging tech has five safety protection features, preventing any damage, such as overheating. Consumers no longer need to worry about their smartphone’s battery thanks to these safety functions.

In other news, some old Samsung Galaxy smartphones will soon have the advanced RAW camera mode feature. Meanwhile, the new Google Pixel Fast Emergency Dialer (FED) has been rolled out.

For more news updates about smartphones and other gadgets, always keep your tabs open here at TechTimes.

Millions of iPhone SE 3 To Be Shipped This 2022, Says Ming-Chi Kuo—Revealing More Details

The cheapest 5G rugged smartphone could cost less than you think

Only 35 AMD Radeon RX 6900 XT Units Shipped Out to Certain Retailer for...

Elkrem is a blockchain dev board for tinkerers

Samsung's rumored Galaxy S21 may not include charger or headphones ...