After revealing information about the new Studio Display and Mac Studio, Apple released a follow-up announcement about the new peripherals for fans which come in the form of a Magic Mouse, Magic Keyboard, and Magic Trackpad.

According to a report by Mashable on Thursday, Mar. 9, the Cupertino titan introduced a fancy mouse called “Magic Mouse,” which arrives in a black-silver color combination.

Aside from that, Apple unveiled two more peripherals, including the Magic Keyboard and the Magic Trackpad, which also come with a similar color pattern.

The special keyboard boasts a Numeric Keyboard, besides the Touch ID feature. At the time of writing, there’s no available black colorway for the Mac Studio. The only option that is accessible is the silver version.

With the debut of the new Studio Display, we could now see a silver stand on top of its black bezels. This might be the hint why these two colors go well with one another.

Regarding their comparison with their white versions, the recently-announced devices appeared to share the same functionality with them.

As of press time, you could purchase a set of black-and-silver accessories along with the Mac Pro. However, the availability has always been the problem with those.

Speaking of the Magic Mouse, fans could not think of any additional features that would be incorporated into it. It appears that Apple preserves the USB-C charging port of the said peripheral, which is situated at the bottom.

Unfortunately, this seems to be its downside. For users who want to use it while charging, it’s impossible to do because of the position of the port.

Despite the awkward design of the mouse, Apple assures that you won’t charge it often since it has a battery life of one month. Indeed, it’s good for those people who work continuously throughout the day.

Related Article: Best MacBook M1 Pro and M1 Max Mouse For Your Needs: From Gaming to Ergonomic Use 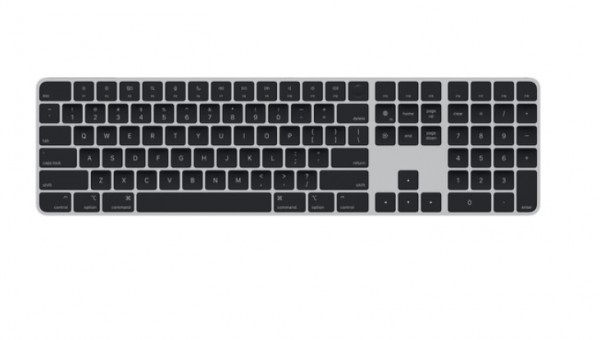 In another article from Macrumors, the Apple Magic Mouse, Magic Trackpad, and Magic Keyboard with Touch ID are now up for orders starting this week.

The new computer mouse costs $99 while the Magic Trackpad sits at $149. Meanwhile, the keyboard has a price tag of $199.

One user noticed that the black mouse costs $20 more than its white counterpart.

Another user wrote that he could not understand why Apple sticks to creating an extended keyboard. As a suggestion, he said that the tech giant should make normal-sized keyboards in black and white options.

Regarding the “Peek Performance” event, the iPhone maker also introduced two new filmmaking tools for iMovie. The Magic Movie and the Storyboards are set to be launched next month.

In another Apple-related report, the Cupertino titan brought five new models for the 2022 iPhone SE. The variants include the Global Model, the US Model, the China Model, the Japan Model, and the Russia Model.

With the amount of time you’re spending at home these days, you deserve a better headset. A wireless one that works with your...