Qualcomm has set the stage for its reveal of the new Snapdragon 8 Gen 1 semiconductors that would soon be the main chip to be used for the Android smartphones of 2022. It would not be necessary for flagships only, but reports say that it would replace the top-of-the-line Snapdragon releases like the 888 or 898 platforms, with a new name scheme.

The popular semiconductor company, Qualcomm, has recently announced its Snapdragon 8 Gen 1 reveal for the Tech Summit 2021 of the company, having the latest top chip of the brand arriving next year. Its focus is on Android smartphones of 2022, focusing on the mid-tier and flagship platforms that would represent the power of Android.

The new chip would utilize the new tech from Arm which is the Armv9 platform that the company would focus on in this newly released chip. The Verge reports that it would be a 4nm processor that is smaller compared to its predecessor, the Snapdragon 888.

The Snapdragon 8 Gen 1 would have an eight-core Kryo CPU that sports a single prime core, as well as three performance cores.

Read Also: Xiaomi 12 Leak Could Pioneer the Snapdragon 898 in Next Android Flagship Smartphone 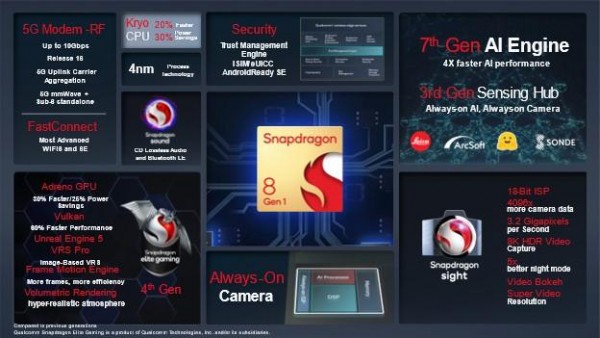 The new Snapdragon 8 Gen 1 was said to be Qualcomm’s finest chip made in its production, being 20 percent better in terms of performance, aiming to improve the use of Android smartphones soon. The semiconductor company truly made this one for the flagship and massive processes, soon powering the Android platform.

Qualcomm’s Snapdragon: How Is It?

Qualcomm’s Snapdragon platform rose to prominence as it manufactured the most used Android chips in the market since the emergence of smartphones and up to the present. The smartphone platform of Android is the only device that outsources chip production from external companies, as a known rival, Apple, is known to design its popular A-bionic series chips.

The popular Snapdragon platform has evolved since then, focusing on the many offers it has for the smartphone device including the latest 5G, a capability to run games and massive tasks, and overall function. Now, it is taking on a new form and look that focuses more on the new name it has, the 8 Gen 1, which is a new step for the company.

Nevertheless, Qualcomm has been somehow secretive about it, not revealing any details until its Tech Summit release this 2021, having it as an anticipated release where people can enjoy it with smartphones. Its arrival on Android would bring a new focus of the semiconductor, and moving forward, it would bring its features and functions to Androids in the coming year.

Apple Music and Spotify Asked by UK Parliament for 50/50 Split on Royalties With...