Apple smart glasses is one of the most-awaited augmented reality gadgets in the market since it would be developed and produced by an advanced tech firm.

(Photo : Photo by David Becker/Getty Images)
The ODG R-8 AR/VR smartglasses are displayed during a Qualcomm press event for CES 2017 at the Mandalay Bay Convention Center on January 3, 2017 in Las Vegas, Nevada. CES, the world’s largest annual consumer technology trade show, runs from January 5-8 and is expected to feature 3,800 exhibitors showing off their latest products and services to more than 165,000 attendees.

Now, Ming-Chi Kuo, one of the most reliable Apple analysts working at TF International Securities, claimed that the new AR headset of the giant iPhone maker would have the power of the MacBook.

He claimed that the giant manufacturer’s new augmented reality glasses would have this power through its in-house M1 chipset.

According to GameRant’s latest report, Kuo claimed that the new Apple AR glasses, which are expected to arrive this 2022, could be integrated with MacBook’s M1 chipset. 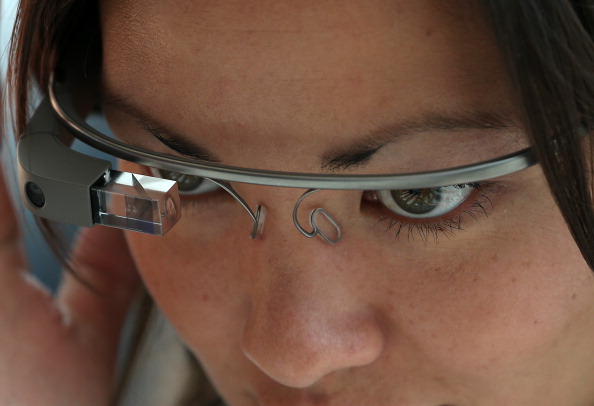 (Photo : Photo by Justin Sullivan/Getty Images)
An attendee tries Google Glass during the Google I/O developer conference on May 17, 2013 in San Francisco, California. Eight members of the Congressional Bi-Partisan Privacy Caucus sent a letter to Google co-founder and CEO Larry Page seeking answers to privacy questions and concerns surrounding Google’s photo and video-equipped glasses called “Google Glass”. The panel wants to know if the high tech eyeware could infringe on the privacy of Americans.

Also Read: Meta Shows Off a Haptic Glove That Allows You To Feel Virtual Objects by Touch

The advanced SoC would allow the new smart glasses to have an independent power that is comparable to the high-end laptops of the giant iPhone maker.

This is a great innovation given that the existing AR and VR headsets are physically or wirelessly connected to handsets or other gadgets.

If the M1 integration is true, there’s a high chance that the upcoming smart glasses would no longer require an operating gadget to work. On the other hand, other rumors claimed that the forthcoming Apple augmented reality gadget could also be an iPhone accessory.

Right now, all these details are still speculations until the giant manufacturer actually launches it.

This function is specifically the in-air gesture controls, allowing consumers to control external devices without touching them. You can visit this link to see more details.

In other news, iOS 15 receives a new feature from Apple, which allows it to send notifications if AirPods are left unattended. On the other hand, Apple Global Head decided to jump to Volkswagen.

For more news updates about Apple’s AR glasses and other similar technologies, always keep your tabs open here at TechTimes.

iOS 14 Release: Some Games Not Working on Updated iPhones or iPads, Here's Why

'Destiny 2' Guide: All Dead Exos Locations and How to Get Them for 'The...