Next-gen Oppo smartphone models could feature a very unusual technology. Rumors claimed that the giant tech creator has a patent describing the integration of new side cameras.

(Photo : Photo credit should read NICOLAS ASFOURI/AFP via Getty Images)
In this picture taken on May 8, 2017, smartphone products are turned off and on 100,000 times at the testing facility of the Oppo factory in Dongguan. Chinese smartphone maker Oppo began life selling DVD players in the in the southern manufacturing hub of Dongguan a little more than a decade ago and only broke into the handset market in 2011. But with an aggressive marketing strategy and concentration on bricks-and-mortar stores.

Oppo, Apple, Samsung, and other in-demand smartphone brands currently have the same camera setup, which consists of front and back sensors. This style is the basic design when it comes to handsets.

However, the common cam setup still has a lot of limitations, which restrict mobile videographers and photographers from capturing the best images and videos they could have. However, this could change once Oppo releases a new model with side cameras.

According to PetaPixel’s latest report, Oppo’s side camera patent was already completed in the first months of 2021. However, it was just approved this September, with the Chinese tech firm not disclosing the exact date.

Next-Gen Oppo Smartphone To Have Side Cameras

“The electronic device comprises a housing and a reflective module, a camera is provided in the housing, the housing is provided with two light-transmitting holes,” said Oppo via its official patent, which LetsGoDigital publishes. 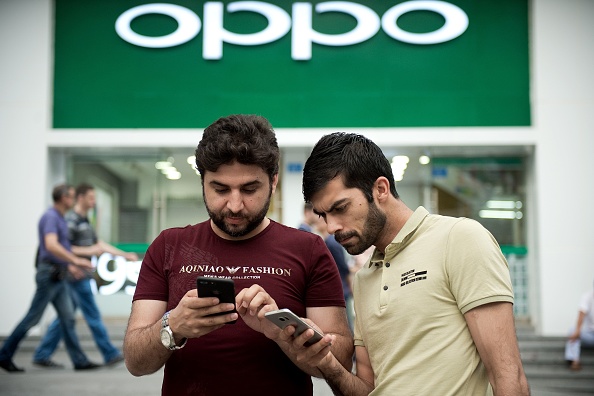 (Photo : Photo credit should read NICOLAS ASFOURI/AFP via Getty Images)
In this picture taken on May 9, 2017, men holding smartphones stand in front of an Oppo shop in Shenzhen. Chinese smartphone maker Oppo began life selling DVD players in the in the southern manufacturing hub of Dongguan a little more than a decade ago and only broke into the handset market in 2011. But with an aggressive marketing strategy and concentration on bricks-and-mortar stores in small and medium-sized cities.

On the other hand, the new Oppo smartphone also features a reflective module located between the camera and the light-transmitting hole in towards the cam sensors.

Based on the manufacturer’s newly leaked patent image, the extra cameras would be placed on the side where the volume and power buttons are located. As of the moment, Oppo hasn’t confirmed the new total number of cams in its upcoming smartphones. The Chinese company also did not disclose if it is already working on the new model.

In other news, Oppo’s under-screen selfie cam could arrive. On the other hand, Oppo with a two-screen handset is also rumored to be released, which is similar to OnePlus’ upcoming smartphone.

Since the new Oppo smartphone with side cameras is not yet released, and only a few details about it are leaked, it is still hard to conclude if the innovation would be efficient.

However, some critics claimed that the new cam setup could allow consumers to capture more HD videos and photos of moving objects. Meanwhile, Oppo hasn’t explained yet how the new side cameras work once they are integrated into one of the company’s next-gen devices.

For more news updates about Oppo and its upcoming smartphone techs, always keep your tabs open here at TechTimes.

The best app for viewing RSS on Android

PS5 restock: our exclusive tracker will tell you where and when to get it

Verizon to default to RCS-enhanced Google Messages app on all Android...

Joining AT&T and T-Mobile, Verizon will set Google's messaging app as the default on all...