Microsoft Surface Duo 2 is one of the latest foldable smartphones in the market right now. The giant tech creator revealed its new product during its Surface event, which focused only on laptops.

Foldable gadgets are becoming more popular than ever as consumers tend to look for smartphones that they could easily store, especially in public.

However, they want to have a flexible handset that could still offer high-end features, as well as great battery life. But, consumers need to remember that having a small device would compromise some functionalities.

Although this is the case, the new Microsoft Surface Duo 2 still offers some advanced features. These include its ultra-wide 16MP camera, as well as 12MP telephoto and 12MP front cam.

Meet the new Microsoft Surface Duo 2. With its sleek profile, stunning double screen and long-lasting power, stay in the moment and get work done anywhere, anytime. Check out the features: https://t.co/89NfaF6e3G

On the other hand, Microsoft also integrated dual-optical image stabilization and intelligent software algorithms. These enhancements can reduce the noise from photos, making it a great smartphone for aspiring mobile or professional photographers.

How To Preorder Microsoft Surface Duo 2?

According to The Verge’s latest report, the new Microsoft Surface Duo 2 is currently available in Best Buy, as well as Microsoft’s official online store. 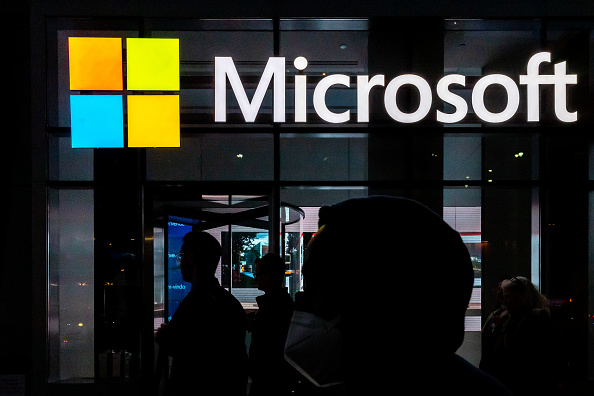 (Photo : Photo by Jeenah Moon/Getty Images)
NEW YORK, NY – MARCH 13: A signage of Microsoft is seen on March 13, 2020 in New York City. Co-founder and former CEO of Microsoft Bill Gates steps down from Microsoft board to spend more time on the Bill and Melinda Gates Foundation.

Both of these virtual shops allow consumers to preorder the 128GB and 256GB variants. However, the two online stores haven’t released the most-awaited 512GB model.

For many consumers, all these prices are high. If you don’t want to spend this much, you can wait for some carrier promotions, which could drastically reduce their prices. However, you still need to read their rules and regulations to avoid being stressed out if there are huge monthly fees.

How Good is Surface Duo 2?

Aside from its advanced camera sensors, this new foldable device also offers some enhanced editing tools. On the other hand, the handset’s camera app also launches across both screens, allowing consumers to take a photo on one side and check the output on the other.

For more news updates about Microsoft Surface Duo 2 and other foldable smartphones, always keep your tabs open here at TechTimes.

ZTE Axon 20 5G Is The First Smartphone With Front Camera Under Screen Display...

Google is getting caught in the antitrust net