“Call of Duty: Warzone” is still suffering from a huge number of cheaters. These hackers are usually targeting normal, fair players since they can easily beat them.

Now he’s just needs to flex for a new sub and we’ll have OG Nick back!

He already posted some videos where he defeated different kinds of “Call of Duty” cheaters. On the other hand, the latest one he fought against uses the newest hack, which allows the player to reach Level 1,000 and unlock Dark Matter instantly.

“Call of Duty: Warzone” players also consider this cheat one of the most rampant ones. It was discovered before the new Season 4 Reloaded update arrives. NICKMERCS said that he encountered the hacker on July 12. However, the popular Twitch streamer showed the hacker that cheats are not needed to win a game.

According to Charlie Intel‘s latest report, NICKMERC was casually streaming his “Call of Duty: Warzone” match. However, he was surprised after discovering that one of the players he killed is actually a cheater. 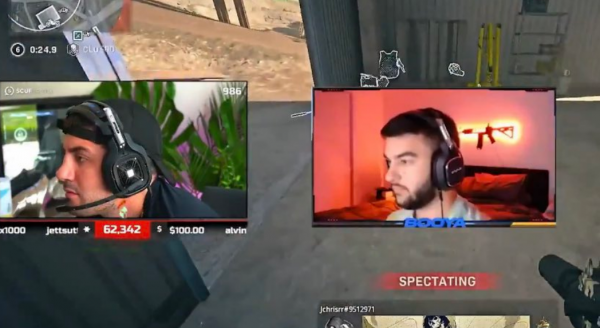 Bruh @NICKMERCS’ impression of @GDbooya had me in tears 😭 pic.twitter.com/5kFUugRYPr

The Twitch streamer confirmed that after the match was over, his account suddenly reached Level 1,000. Not only that, but he also claimed that he received the popular Dark Matter camo.

NICKMERCS added that all his “Call of Duty: Warzone” weapons now have Dark Matter cosmetics to make it more interesting. However, this is not really good for him since Activision could also tag his account as a cheater.

This means that if the game developer discovers that he was able to reach Level 1,000 suspiciously, there’s a high chance that it could get banned from “Call of Duty: Warzone.” As of the moment, NICKMERCS hasn’t confirmed if he will contact Activision to fix the issue since he is not actually the one that used the illegal account enhancement.

Since hackers are becoming more rampant than before despite Activision’s efforts, Dexerto reported that players are now requesting the game developer to release some cross-play changes to fix the issue.

They added that “Call of Duty: Warzone” is now unplayable because of the rising cheats.

“Save the console community and enable console-only cross-play as a temporary fix,” said an anonymous Reddit user.

“Apparently getting an anti-cheat is hard, so at least enable some sort of console-only cross-play. As just a temporary solution. The game is literally unplayable at the moment,” he added.

For more news updates about “Call of Duty: Warzone” and other similar shooting titles, always keep your tabs open here at TechTimes.

Global smartphone sales plummeted 20% in Q1, thanks to COVID-19

How to leverage the power of Power BI using Apple technologies