(Photo : Photo illustration by Matt Cardy/Getty Images)
In this photo illustration a woman uses a credit card to buy something online on August 11, 2014 in Bristol, United Kingdom. This week marks the 20th anniversary of the first online sale. Since that sale – a copy of an album by the artist Sting – online retailing has grown to such an extent that it is now claimed that 95 percent of the UK population has shopped online and close to one in four deciding to shop online each week.

The U.S.Congress already approved the Emergency Broadband Benefit (EBB) Program, which is a part of the final stimulus package under former U.S. President Donald Trump, way back in 2020. The EBB program is expected to help the residents of the United States, especially those who have low incomes, to pay off their internet bills during the ongoing global COVID-19 crisis.

The Federal Communications Commission confirmed that it will be the one administering the new $50-per-month subsidies, which will be a total of $3.2 billion. On the other hand, the U.S. Treasury will be the one to set up the fund.

But, before you can have FCC’s internet bill support, you still have to sign up for it. Here’s what you need to do.

According to BGR’s latest report, FCC confirmed on Thursday, Apr. 29, that the U.S. residents can soon sign up for its $50-per-month internet subsidies. Americans can do this starting May 12. To do this, they need to visit FCC’s “Get Emergency Broadband” official website. 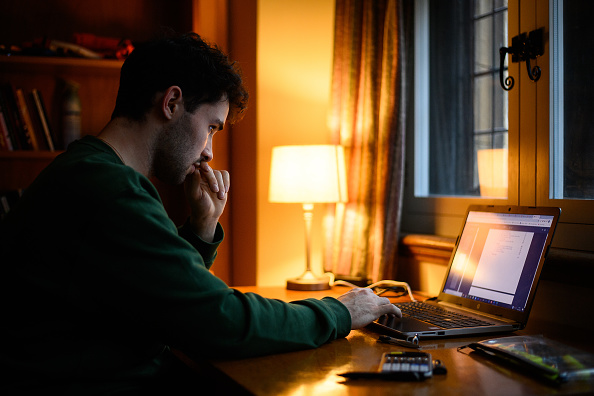 (Photo : Photo by Leon Neal/Getty Images)
Lucas Strange, 22, continues to study for his degree in physics via online learning sessions from his room in Gonville and Caius College at the University of Cambridge, on January 29, 2021 in Cambridge, England. British Prime Minister Boris Johnson has said that the government hopes to start reopening English educational institutions on 8 March, depending on factors such as the rate of vaccination amongst priority groups.

Also Read: FCC Asks Users to Report Internet Broadband Connection, Whether Good or Bad-Here’s How to Do It

When it comes to eligible households, the Federal Communications Commission confirmed that those who qualify for Lifeline benefits through participation in Supplemental Security Income,  Federal Public Housing Assistance, Medicaid, Veterans and Survivors Pension Benefit, as well as SNAP can get the promised internet financial support.

Aside from them, those who participate in select Tribal Programs, those who received a federal Pell Grant, and those who experienced a substantial income loss since February 29, 2020, can also get the $50 monthly subsidies.

If you are qualified for FCC’s monthly internet financial support, you will have these following benefits:

If ever your household is not eligible for FCC’s internet bill financial support, you can still reduce your monthly wifi due. Here are some methods you can use, as provided by Reviews.Org.

10 Fascinating Wifi Facts and Inventions: From What it Means to the Woman Who...