Filipinos are mostly known in the boxing sports, thanks to the great fighter, now Philippine Senator Manny Pacquiao, and singing reality shows like the Got Talent and Idol franchises where a number of Filipinos have snatched some titles.

Meanwhile, online gaming and e-sports are pretty new industry to this Southeast Asian country. Despite that, their passion and commitment to the games are unwavering. While the world is yet to see a Filipino team in the international esports arena, two names have made history with their passionate shoutcasting: Lon and Dunoo.

Who are Lon and Dunoo?

“Lon” or Marlon Marcelo in real life and “Dunoo” or Aldrin Pangan started their careers as the go-to broadcasters in the Philippines when the e-gaming was beginning. Back then, they were casting games in Mineski Infinity cyber cafes using megaphones. 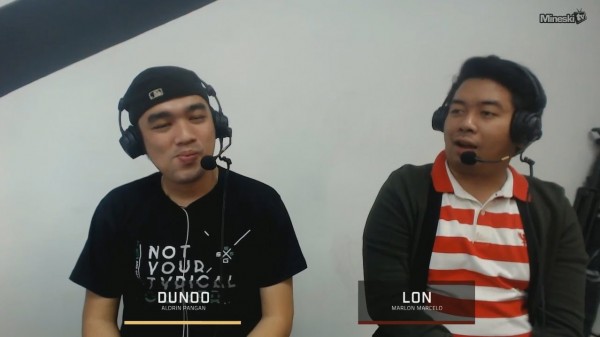 With the type of casting they do with all the shouting, you can just imagine the noise they are producing. Thus, some people called it “Pee-noise” casting, which is a spin on Filipinos called Pinoys. But more often, Lon and Dunoo’s casting is called as shoutcasting.

Later, the duo would start the MineskiTV and later become the go-to-esports in the Philippines in 2013. They would begin casting MET events as well as DOTA 2 tournaments. They were quite famous in the Philippines, but unknown in the international scene… yet.

After years of endless shoutcasting and hard work, Lon and Dunoo finally got a pass to the Dota 2 “The International.” The Philippines’ veteran Dota shoutcasting duo will be bringing their brand of hypecasting to the world’s grandest eSports arena.

According to a statement published by Mineski.net, Lon and Dunoo were invited by Valve to cover the main event matches, and they broadcasted live through Mineski TV’s Twitch channel.

Such experience was deemed truly memorable for the veteran casting duo not only as they have made their dream of casting The International or witnessed the biggest upset in the TI history.

Lakad Matatag: The Story Behind and Beyond

Some esports caster calls have been known in the community for years. While Tobi says, “No one has ever done that!” and LD just says “Waow” to put an exclamation on some great battles, Lon and Dunoo have made history as they shouted: “Lakad Matatag!”

In 2018, while casting the ESL One Katowice game between Team Secret and Fnatic, Lon shouted, “Lakad Matatag!” while Dunoo was chanting “Normalin! Normalin!” This was after seeing Fnatic come back after a great upset and even ended victoriously.

(Photo : AFK Gaming Dota 2/YouTube)
Lakad Matatag: The Story Behind and Beyond

The four-word-phrase that the duo said kind of stuck among the Dota 2 community, and it now appears in most chatwheels. It has even become a catchphrase for the game.

What is Lakad Matatag?

While Lakad matatag is now common in Dota 2, it has a weird origin but certainly a catchphrase. “Lakad matatag normalin normalin“ has a few layers of meaning. In direct translation, lakad matatag means walk strurdy while normalin means to make a basic attack.

Although “walk strongly and do some normal attacks” may sound logical, lakad matatag goes beyond the literal meaning as it is actually a message of encouragement.

In chatwheels, lakad matatag is often used to boost the morale of the team. However, In Dota 2, Lakad matatag can be easily accessed in a chat wheel or even used as a Lakad matatag ringtone if you’re really into the game. This has made lakad matatag one of the best popular phrases associated with Dota 2.

Read also: Celebrate Halloween 2020: Pokemon Sword and Shield Will Have More Grimmsnarl and Gigantamax Gengar to Accompany You

This is owned by Tech Times

How To Choose Device With Great Camera Quality? Here's What You...